Brief Introduction: TimeTime ransomware is currently trending. It is written in C#.Net (C# is a general-purpose, multi-paradigm programming language) and not obfuscated in any way. After encryption, the “.timetime” extension is added to encrypted files. The ransom demand is observed to be lower compared to other ransomware groups. TimeTime ransomware wants victims to pay only €100 through Paysafecard. The ransom note “@[email protected]  and decryptor executable “@[email protected]” is dropped by the ransomware on the system. The ransomware deletes shadow volume copies and the ransomware excludes some of the folders like AppData, Windows, Common Files,  WindowsPowershell, ProgramData, Program Files from encryption.

As shown in Figure1, the malware is PE-32 bit .Net binary and is not packed (see Figure2). Figure3 below shows the hashes corresponding to malware and the binary has GUI subsystem and a suspicious compile time of Aug 2069 which most probably is fake. The executable is written in C#.Net. The malware implemented the ASLR and DEP which provide hindrance during analysis.

The meta-data shows that the malware can be executed with any permission acquired by the user as shown in Figure9.

Upon execution, the malware encrypts the files and adds the extension “.timetime” to each encrypted file as shown in Figure10. The malware also drops the ransom note .txt file with the name “@[email protected]” on Desktop and other folders containing warnings and instructions for the victim to follow.

Figure11 shows the contents carried by ransom note dropped by the “TimeTime” ransomware on execution. It states that all of the victim’s pictures, videos, files were encrypted and lots of precious data which includes files, computer information, passwords, cookies, etc. stolen by the malware, and if the victim does not pay the ransom then all this information will be leaked on the dark web. Further, the ransom note also states that the victim should not rename encrypted files or use third-party software for decryption. The ransom note demands the amount of €100 through “paysafecard.com”. Paysafecard is a prepaid online payment method independent of bank accounts, credit cards and other usual financial systems. Customers have to buy the vouchers from local outlets and pay online by entering the code at the respective website.

The ransom note also mentions the file “@[email protected]” which was dropped by ransomware on the desktop to decrypt files and on execution, a window pops up as shown in Figure12. On the left ““@[email protected]”  is shown which was dropped on the desktop and on the right side the pop-up window is shown which also mentions that the victim’s files are been encrypted and demand psf code to enter for decrypting files. Upon execution, the ransomware after dropping this “@[email protected]” file also executes it, and a pop-up window is displayed on the screen without user intervention.

Figure14 shows reverse-engineered code corresponding to malware and the logic is defined to execute the above-mentioned commands to delete shadow volume copies, delete the backup catalog and to disable windows boot recovery option. As per the command line argument “/x”, “/x1”, /”x2” or “/x3” passed corresponding commands will execute. Figure19 shows a snippet for registry access by the ransomware and using “safeboot” option to gain persistence and run in safeboot mode.

The ransomware creates a new registry entry named “TimeTime” under HKCU. A new value is created each time under “HKCU\TimeTime” whenever a file has been encrypted by the ransomware (see Figure20 below). 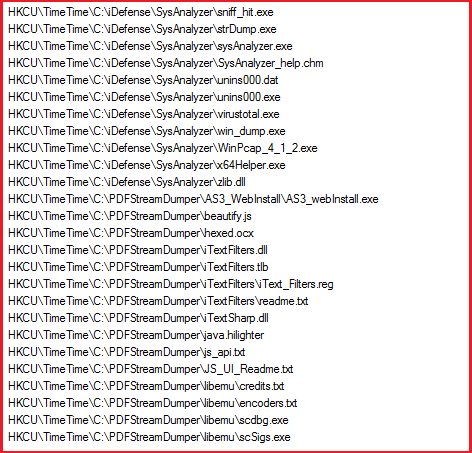 The ransomware has the following functionality/capabilities:

・Synchronization capability to handle multiple processes and threads and to access shared resources.

・Capability to sleep or deactivate when want to hide itself.

・Regularly update all software on all systems, network and other devices and turn on automatic updates if possible.

・Implement Internal threat management policy which includes training employees on the latest threats and ransomware attacks and what to do in such scenarios.

・Must implement regular back-ups policy, more than one back-ups and kept one on a separate network and other isolated offline at a different place.

・Use best-in-class IDS/IPS, firewall and other antivirus/anti-spam/anti-ransomware and anti-malware solutions.